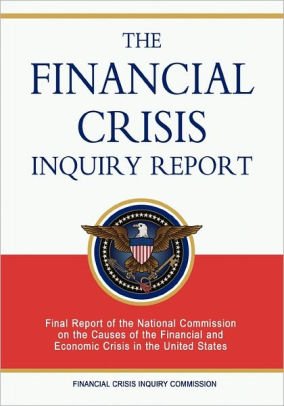 The Financial Crisis Inquiry Commission (FCIC) was created on May 20, 2009, to examine the causes, domestic and global, of the financial and economic crisis in the United States. During the course  of its investigation, the ten-person bipartisan committee reviewed millions of pages of documents, interviewed more than 700 witnesses, and held 19 days of public hearings in New York, Washington, D.C., and communities across the country that were hit hard by the crisis. The final report presents the Commission’s findings and conclusions regarding the causes of the crisis.

TOPICS OF INQUIRY BY THE COMMISSION

The Commission’s statutory instructions set out 22 specific topics for inquiry and called for the examination of the collapse of major financial institutions that failed or would have failed if not for exceptional assistance from the government. These include:

CONCLUSIONS REACHED BY THE COMMISSION

The following are the conclusions reached by the Commission:

In January 2011, the Commission issued a 400+ page report setting forth its findings and conclusions. The report included two dissenting opinions,  Appendices, and extensive notes.  It provides a valuable and detailed record and examination of events leading up to the crisis.  You may view or download the FCIC Report in full or by section by clicking on the links below.

Table of Contents and Front Matter

Conclusions of the Financial Inquiry Commission

Part I: Crisis on the Horizon

Chapter 1 - Before Our Very Eyes

Part III: The Boom and Bust

Chapter 17: September 2008: The Takeover of Fannie Mae and Freddie Mac

Chapter 18: September 2008: The Bankruptcy of Lehman

The FCIC website at YPFS can be reached by clicking here.